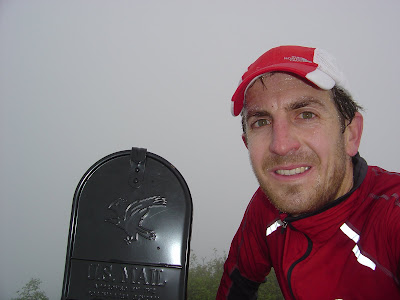 Last weekend I engaged in some really fun multi-sport action. My buddy Brock and I rode our bikes from my house in Seattle around the top side of Lake WA and out to the mountains (50 something miles), where we met up with another friend and made a quick trip up and down Mailbox Peak. Then it was off to some friends' house out that way for an intense evening mountain bike race- pretty short, but super technical and fun. The weather for the whole day was unfortunately un-summerish (pouring rain and quite chilly), which resulted in my coming down with the flu the next day. But I digress...

So, to come around to the reason for my topic (commercializing the outdoors), I'll focus on the Mailbox Peak section of the day's activities. I've run Mailbox many times, and am there quite frequently doing repeats- it's one of my favorite local mountains within easy striking distance of the city. That said, when I go to the mountains I love nothing more than the feeling of getting away from the city, away from the vehicles and the branding and the noise. On this particular day up Mailbox, I arrived at the peak to a shocking new addition- corporate branding. There was a bright yellow newspaper box attached to the mailbox post with a huge First Ascent logo emblazoned on it. I have a large problem with this. 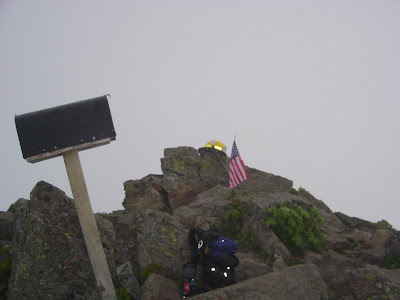 Granted, a mailbox in and of itself at the top of a mountain is a bit strange and out of place, but it's part of this particular mountain's story and personality. It makes it unique and is completely anonymous and in the spirit of the outdoors, with a registry for trail-users to share comments, etc. Seeing a local outdoors company take corporate branding to nature is not only offensive, but sad. While it's a unique free advertising idea (their box apparently is full of temporary tattoos of their logo...), it simply has no place in the outdoors. I'm uncertain whether or not First Ascent officially placed this box up there, but they are clearly endorsing it on their Facebook page, and the guys who put it up there blatantly documented their actions. All my feelings about corporate branding in nature aside, this is a criminal act in that it's vandalizing/littering on public lands in a national forest, and it's just plain lame. 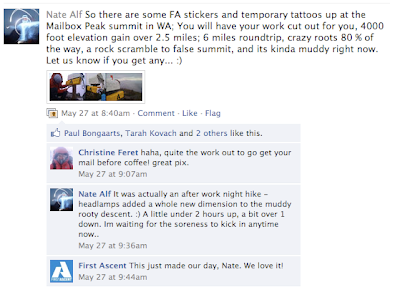 I'm curious to hear what other people's reactions might be to this. Have you seen anything similar elsewhere? I realize we see a lot of corporate logos at trail races at aid stations/starts/finishes, but those are temporary and the logos are from sponsors actually supporting the race. To me, this is an example of an "outdoors" company blatantly exploiting the outdoors. Anyone else have similar experiences seeing branding outdoors? Is this the wave of the future? Will we start seeing bumper stickers on trees in remote wilderness next? Either way, next time I go up Mailbox (within the next few days...), I'm going up with a prybar and coming down with that offensive yellow box. Oh, and I'm certainly not buying any First Ascent stuff. Ever. Poor form, First Ascent. Poor form.
Posted by Sam at 3:33 PM

I cant believe what douche bags those guys are on so many levels. First, is placing a "First Ascent" mail box on what must be the 3 millionth ascent of this classic local hike. Second, is to brag that it took them a full 2 hours to get to the top. They must have trained a year for this miraculous accomplishment by doing the stair master at 24 Hour Fitness for 30 minutes 3 days a week. "Dude, I am like totally waiting for the soreness to kick in." Third, is that he claims some sort of James Bond feat for hiking 2.5 miles in the dark. Holy Headlamps Batman!! These stealth chooches are hardcore and extreme. Good thing they had 1st Ascent technical gear to survive what must have been a nail biting expedition - wrought with slippery mud and man eating roots.

Hats off to my new found heroes and to the manufacturers and creators of First Ascent - who will never make it to any mountain first.

Good news, Brock- the litterbugs who accidentally left this garbage atop Mailbox nailed to the post have had their garbage removed. So sad to crush what was their dream for over a year, but alas, their box is now officially removed, and Mailbox Peak is once again free of branding and trash. All is well.