Last week I returned home to Seattle on a flight from SFO, and had decided I'd be as energy efficient/frugal as possible getting home from the airport.  While my original plan was to simply run home from the airport, the 20+ miles looked far less appealing when I realized I'd have to carry my garment bag with a suit in it in my hand, as it didn't fit in my medium-sized carry on bag/backpack.  So, I opted for the shorter run option and headed for the new Light Rail airport station, which would take me as far as downtown.

There's something very freeing about running places when most would expect you to take a car.  I almost felt like some sort of a running superhero, as I had running clothes hidden underneath my blue jeans and shirt, ready to go when the opportunity came.  Now, this unfortunately led to a very awkward encounter on the light rail train car.  I chose a seat in the middle of the train where no one was sitting, and in this spot the train is very narrow and there are only 2 rows of seats, both facing inward and therefore facing each other.  As I rifled through my bag to get my running shoes, etc., 3 nice young gals sat down in the row directly in front of me (literally picture 3 inches between our knees...).  I then sat for a moment, pondering how to warn these women in such close proximity that I was about to remove my pants... or if I should say nothing, move quickly and just get it done.  I didn't want to get slapped or scare anyone, so I opted for a fair warning.  Not sure what to say, I just looked at them and kind of blurted, "So, I just wanted to let you know that I'm not a creep or anything, but I am about to take off my pants.  But not to worry!  I have running clothes on underneath."  The looks on their faces went through countless permutations during the short course of my warning- from shock to fear to confusion to perhaps a look of relief and amusement.  As I stood up and popped the button on my jeans, they responded, "wow, thanks a bunch for warning us!  We would've literally freaked out!"  We all laughed, and the crisis was averted.

Anyway, despite the awkward changing experience, it was a great trip.  I got my bag packed up, and when we got to the Westlake station downtown, I was on the move!  While I can't say I'd recommend running 10+ miles with a garment bag in hand and a full pack, it worked alright, and like I said- it was very freeing to arrive back at our front door mostly under my own foot power.  Lessons learned- 1) Find or invent a wrinkle-free suit that I can smash into a pack and not worry about.  2) Always warn people before taking off pants.  3) Running is incredibly freeing and a very valid form of transportation.
Posted by Sam at 2:50 PM 1 comment: 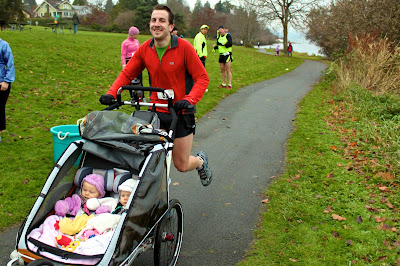 This past weekend I took our twin 10 month old girls out for their first official race- the Seattle Ghost Half Marathon.  I pushed them in our awesome jogging stroller, and despite the chilly temps they had a really fun time.  They laughed and we sang, and chatted much of the race- they hardly napped at all.  Not only that, but when it was all said and done, the girls finished as 2nd women overall (they tied each other)!  It is a real joy to get our girls outside every day and see the pure delight they have in simply getting outside and enjoying the crisp fresh air.

I haven't run any races or really any major training runs in quite a while, and this race with the girls was a really nice energy boost for me.  Perhaps I've been in a funk from a post-Rainier Triple Threat hangover of sorts.  I've gone through this sort of thing before; you are so focused on a single big event for so long, that when it's actually completed, it's pretty difficult to get motivated to move forward.  That said, my body was ready for a nice break anyway, and I feel fresh and ready to jump back into running more seriously in the coming weeks and months, and I'm excited about it.  I have no major plans in the works, but am excited to be back on the running train for the sheer joy of it.
Posted by Sam at 10:30 AM 2 comments: